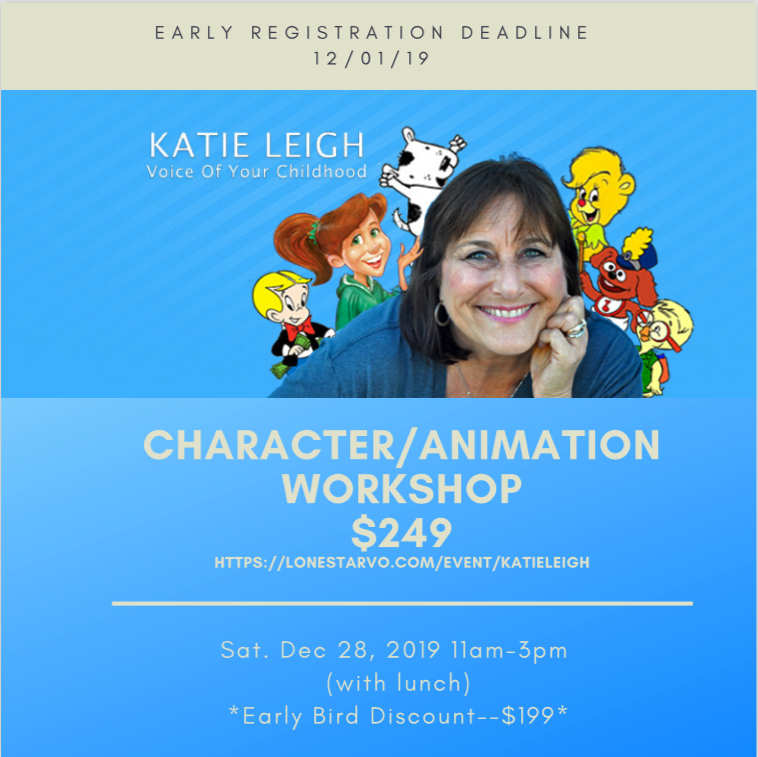 Learn by doing! Have fun discovering your inner vocal repertory company of characters. Everyone will get lots of time in the booth and direction. Katie will coach and stretch you to not only create a character voice, but an informed, character read on the spot. You will be able to use these tools to expand your own character roster, or the depth of current characters for auditioning and future work. We will work with scripts from Animation, Video Games and E-learning Apps.

Email katie@katieleigh.com for more info and to register.

Since 1981, Katie Leigh has been a part of the Los Angeles voice over community, starring in such Emmy-award-winning and fan favorites hits as “Muppet Babies,” (Baby Rowlf) “Darkwing Duck,”(Honker Muddlefoot) “Richie Rich,”(Richie) “Disney’s Adventures of the Gummi Bears,”(Sunni Gummi) “Totally Spies,”(Alex) and many more. In 1987, she took on the role of Connie Kendall in the world-wide radio show “Adventures in Odyssey,” a role she has lovingly continued ever since (the longest an actor has played a character on the radio, they say). Katie supplied her voice over talents to such high profile projects as “LEGO Star Wars: The Padawan Menace,”(Han Solo) and “Sailor Moon,” Sailor Iron Mouse). Currently, she is working on the Netflix series, Legend Quest and “Rainbow Butterfly Unicorn Kitty” for Nickelodeon. Her video game experience is extensive as well, including Blade and Soul, Grim Fandango, Maple Stories and many more!

In 2015, Katie took on her first voice-directing job with the award winning radio play “Rex Tanner and the Sword of Damocles.” Since then she has voice-directed several animated series and an animated feature film (“The Return”).

She has an extensive background in ADR for live action TV/Film (which includes supplying the voice for the Maharaja in “Indiana Jones and the Temple of Doom”), as well as dubbing for animation and anime, Katie is best known for her fantastic children, teen and character voices (but she can sound like a grown-up, too!). She and her husband have five grown children.

Class size is limited so Reserve your spot now!

See you in the booth!