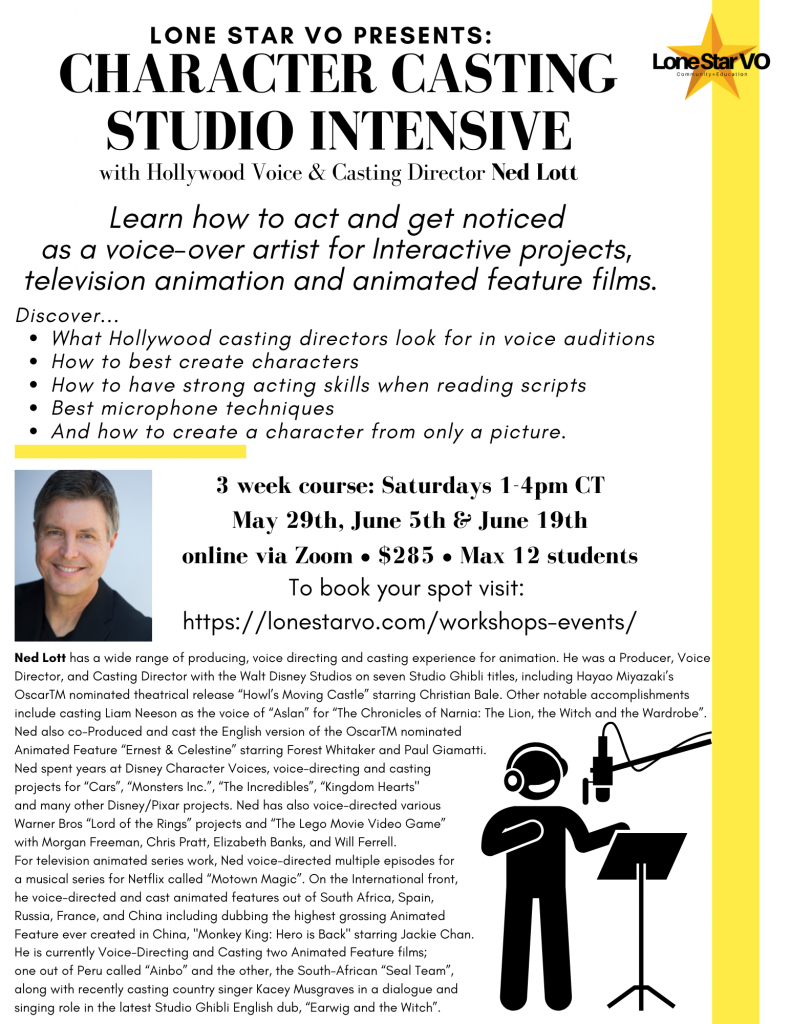 This is a 3 week course for students wanting to go the next step in learning audition techniques on microphone. The ZOOM class is an overview of how to act and get noticed as a voice-over artist for Interactive projects, television animation and animated feature films. We will cover what Hollywood casting directors look for in voice auditions, how to best create characters, how to have strong acting skills when reading scripts, best microphone techniques, and how to create a character from only a picture.

No substitutions, refunds or rain checks.

Ned Lott has a wide range of producing, voice directing and casting experience for animation. He was a Producer, Voice Director, and Casting Director with the Walt Disney Studios on seven Studio Ghibli titles, including Hayao Miyazaki’s OscarTM nominated theatrical release “Howl’s Moving Castle” starring Christian Bale. Other notable accomplishments include casting Liam Neeson as the voice of “Aslan” for “The Chronicles of Narnia: The Lion, the Witch and the Wardrobe”. Ned also co-Produced and cast the English version of the OscarTM nominated Animated Feature “Ernest & Celestine” starring Forest Whitaker and Paul Giamatti. Ned spent years at Disney Character Voices, voice-directing and casting projects for “Cars”, “Monsters Inc.”, “The Incredibles”, “Kingdom Hearts” and many other Disney/Pixar projects. Ned has also voice-directed various Warner Bros “Lord of the Rings” projects and “The Lego Movie Video Game” with Morgan Freeman, Chris Pratt, Elizabeth Banks, and Will Ferrell.

For television animated series work, Ned voice-directed multiple episodes for a musical series for Netflix called “Motown Magic”. On the International front, he voice-directed and cast animated features out of South Africa, Spain, Russia, France, and China including dubbing the highest grossing Animated Feature ever created in China, “Monkey King: Hero is Back” starring Jackie Chan. He is currently Voice-Directing and Casting two Animated Feature films; one out of Peru called “Ainbo” and the other, the South-African “Seal Team”, along with recently casting country singer Kacey Musgraves in a dialogue and singing role in the latest Studio Ghibli English dub, “Earwig and the Witch”.