Here you will find a list of current voiceover workshops, classes, events and workouts. You can select by location (category) and type (beginner, intermediate, animation, business, etc.)

Have suggestions or want to add your event? Email us! 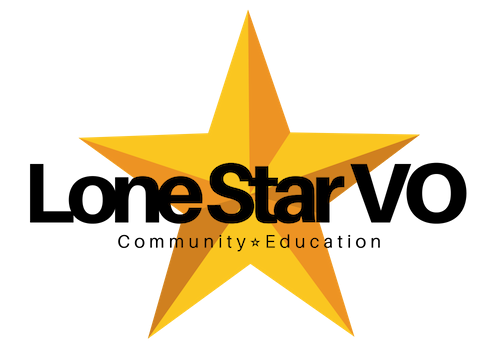 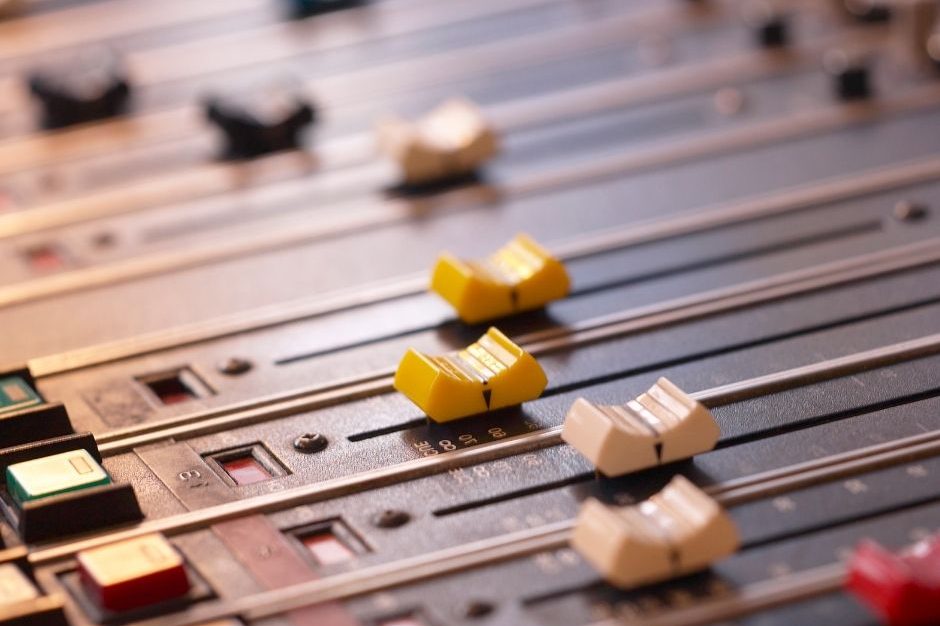 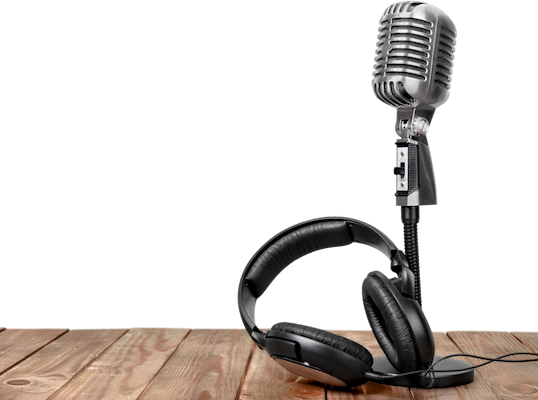 Join us for a FREE Lone Star VO Online Voiceover Workout. This week we’ll be working on our anime reads!

We will meet online via zoom! Max 12 participants. Zoom info will be sent 1 day prior to the event.

Lone Star VO Workouts are peer-to-peer workouts. Feel free to share your favorite anime clips as we analyze scenes and work on our performance.

To reserve your spot visit https://lonestarvo.com/workshops-events/ 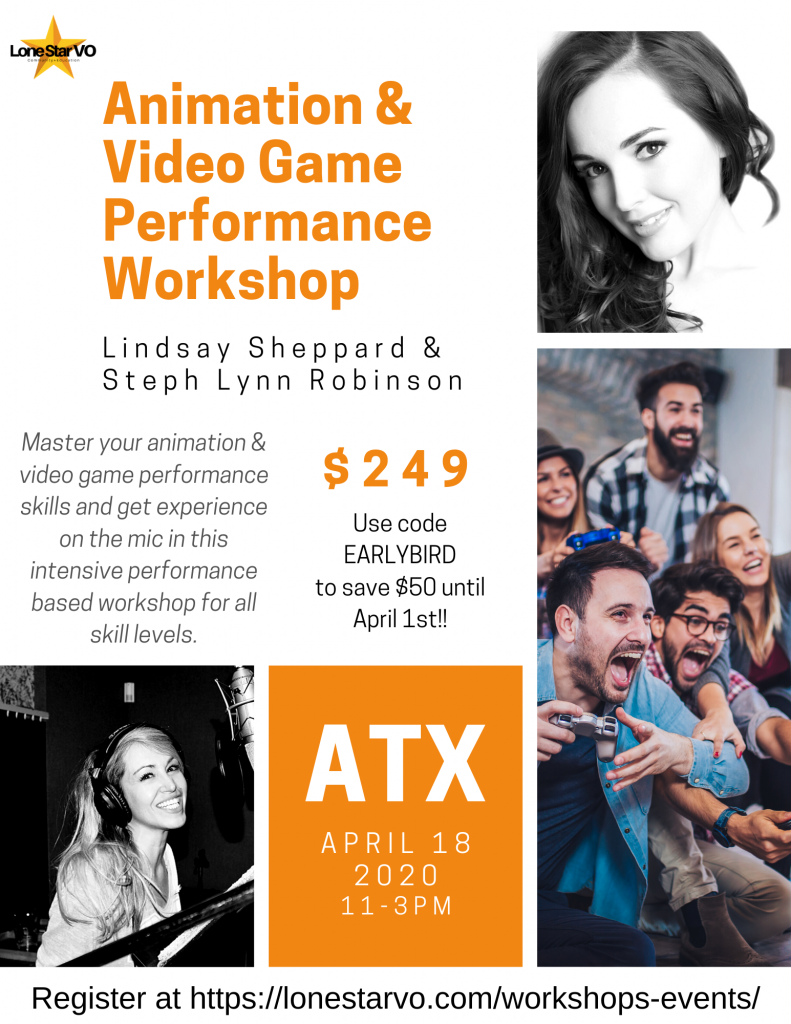 Master your animation & video game performance skills and get experience on the mic in this intensive performance based workshop for all skill levels, taught by industry experts Lindsay Sheppard & Steph Lynn Robinson.
We will be discussing the differences in performance between animation vs video games, anime vs pre-lay, preschool vs school age, cartoony vs sitcom, HOPA vs Mocap, action vs horror and many more. We’ll also discuss different terms that you might come across in session as well as protecting your voice during intense voiceover sessions.
Come prepared to work as each student will be directed on how to give it your all on the mic!
Cost: $249
Use code EARLYBIRD to save $50 if you book by April 1st!
To reserve your spot go to
https://lonestarvo.com/workshops-events/
and select Animation & Video Game Performance Workshop – ATX
If you have questions, email lonestarvo@gmail.com
About your instructors:
Lindsay Sheppard has been a voice actress for nearly 20 years working all sides of the voiceover industry, from anime and games to commercials and narration and even working side by side with her husband to run The Sheppard Agency, a national voiceover talent agency. She is also the founder of Lone Star VO, a community and education resource for Texas based voice talent. Throughout her career, she has voiced over a hundred characters and thousands of commercials and narrations for companies like Disney, Nintendo, Google, Microsoft, Coca Cola, Hooters and more. In the animation, anime and gaming worlds she is known as Saphron Cotta-Arc in RWBY, Mera in Epithet Erased, Kalos Queen Aria, in the long running anime series, Pokemon; as well as the lovable halfling bard, companion/narrator Linzi in the epic CRPG game Pathfinder: Kingmaker. Other notable roles include Agent Caila Phoenix in LEGO Ultra Agents, Aardwolf in Kemono Friends, Jimmy Amy & The Lux 5000 in Awesomenauts, Amaterasu/Innocent Princess Prim/Queen Magnus the Black/Onion Patch/all 3 Raven Vampires/Dazzling Archer/Adept Thief/Mugnier Purifying Light in Shadowverse, Barrage/Mistress of Arms in Heroes of Newerth, Sandbot/Kidbot in Vacation Simulator, Shita in B’t X Neo, Meguhime in Actors: Songs Connection and various zombies in Zombie Panic Source Contagion. She also has upcoming roles in Fairfail, League of Maidens, Ice Scream 3 and more!
Steph Lynn Robinson is an award-nominated voiceover actress best known for her animation work. Having worked on both sides of the glass—as a performer and on the production side—Steph Lynn has a unique perspective on what makes an audition pop! She has recorded nearly a hundred episodes of animated television. She is also a regular contributor to Backstage Magazine’s ‘Expert Advice’ column on all things VO. She has provided the voice of Priscilla in Freaktown (Teletoon/Cartoon Network), both Ping and Chachi in Julius Jr. (Nick Jr.), Zoom Shine in Cirque-Du-Soleil: Luna Petunia (Saban/Netflix), Twins Kelly & Kelli in Looped (Teletoon/Amazon Prime), Badoomcha in Space Bacon (YTV), and numerous roles on Super Why! (PBSKids) and Little Charmers (Nick Jr.) She voiced the reindeer Dancer as well as a few other characters in the Holiday Film Elliot the Littlest Reindeer, staring Josh Hutcherson and alongside John Cleese, Martin Short, and Samantha Bee. Steph Lynn has been nominated for 5 consecutive Voice Arts™ Awards for “Outstanding TV Animation – Best Voiceover” (2015-2017) as well as “Outstanding Animation Demo Reel” (2014) by the Society Of Voice Arts & Sciences (SOVAS™) in Los Angeles, CA.
Read more
Categories: Austin Tags: acting advanced animation anime beginner intermediate technique video games workshop
April 2020 Apr 2020
Subscribe to filtered calendar